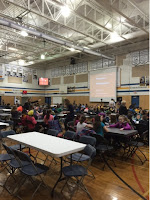 Our fourth annual EIPS Scratch Day was March 10, 2016 in the Bev Facey main gym. Over 300 students in grades 4 to 9 participated in coding challenges designed for beginner through experienced Scratch users.

Students were given a list of challenges to complete, and were awarded points for completing each. The supervisors had access to a form (see below) that they used to assign points to a school as students completed challenges. For an overview of how that worked, check out Creating a Leaderboard using Google Drive, but note that the "on form submit" trigger was overwhelmed by the speed at which student were completing challenges. 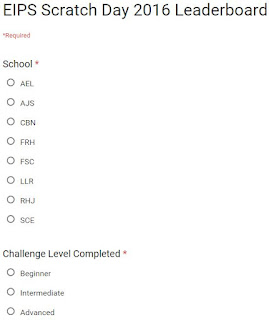 Throughout the day there were just over 3000 completed challenges recorded, about half of them "beginner" level, and the school with the most points per student was Rudolph Hennig Junior High with 6479 points recorded for their 42 students. In second place was FRH (3387/23) and third was LLR (5303/39).

Of course the event wasn't all about getting points. After lunch we had an unplugged computing science activity inspired by csunplugged.org/binary-numbers where students got into groups of four and represented 4-bit binary numbers by standing (1) or squatting (0). We even did some adding and subtracting of binary numbers, such as 1101 - 0100 = 1001 (13 - 4 = 9).

At the end of the day, once a few schools with longer bus rides had left and the tables had been cleared out, we repeated that activity with 8-bit binary numbers.


Along the side of the gym we also had some booths set up where the amazing Mr. Chung's students had set up technology demonstrations of cool things like Makey Makey, Oculus Rift, Google Cardboard, Samsung Gear VR, and mBot.

Hopefully the students and staff learned some things and are inspired to try other coding activities such as code.org, codecombat.com, or even more advanced things like robotics, microcontrollers, or app creation.

Some feedback we've received about the event includes:

I just wanted to pass along a big thank you from FSCS. We really enjoyed scratch day yesterday and it provided our grade six with valuable skills that they will follow up in class. I loved the way the challenges were done this year with the score keeping. via C. Charest

I just wanted to say thank you for such a great day yesterday.  I think that 320 students had an amazing day. Those kids were pumped and excited about Scratch and worked the entire day.  To maintain their attention and concentration that long was impressive.  Thanks for all your efforts and organization.  I was happy to help out, and enjoyed my entire day.  I thought the inclusion of the high school students and their demos was really cool part of the day. via D. Nelson

Just got back from Scratch Day! 350 kids, tech, tech support, consultant support, coding, all levels of students- what great opportunities for our learners. via D. Barron

Thank you again (and also to your team) for a wonderful day. The grade 4s were abuzz and felt so special to be part of something with the older students. We will definitely see you next year! via H. Bianchini

Thank you to everyone who participated and helped out, hopefully I haven't forgotten to include anyone here. The staff and students at Bev Facey were amazingly helpful and accommodating, in particular G. Chung and A. Mali coordinated so many logistical things. J. Steele-Watts and her commercial foods staff and students also put together a great lunch. Thank you as well to FRH and B. Salyzyn for lending tables and chairs.

Events like this can't happen without the support and encouragement of Central Services staff, particularly Learning Technologies and Supports for Students. Thank you to G. Kloet, E. Carrasco, and E. Diaz for setting up the network and making sure all of the technical details worked. Thank you to D. Nelson, J. Ference, J. Sundar, L. Sereda, D. Barron, and J. Clark for coming out and helping, and to J. Clark and L. Skitsko for paying for busing and some substitute coverage from the Learning Services budget. Of course a big thank you to all of the school staff that brought students and arranged all of the related logistics, and to E. Zimmerman and M. Liguori for being supportive of this event.

Perhaps wireless display devices are not great for classrooms 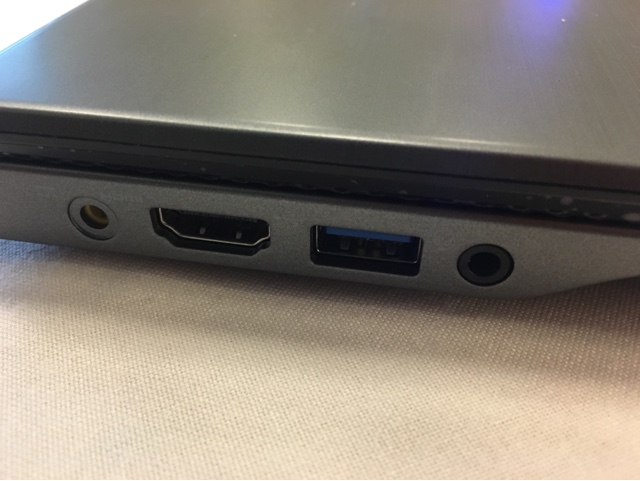 Over the years we've tried out a number of wireless display devices, including Apple TV, Chromecast, and various other proprietary or standards-based dongles and software. I've recently started to think, though, that these are not a good idea.

Of course I'm open to being convinced otherwise.

The main reason I'm thinking they're not a good idea is that there are better (and more "real-world" ways to get student content up on the big screen in a classroom. The obvious one is that students can share content with their teacher, whose computer is connected to the big screen, via the usual ways that they share things with their teacher, such as Google Drive, Classroom, Office 365, email, or social media. In my experience this is also how things work in environments outside of education.

Another issue with some of these devices, particularly Chromecast, is the lack of controls or restrictions on who can connect to it. Apple has introduced passcodes, onscreen codes, passwords, and device verification, but many other vendors have not. This means that anyone on the same network as your device can display content on that device. While this is a great opportunity for digital citizenship education, it does occasionally cause issues.

As well, this process isn't always "simple, solid, and enjoyable" (the phrase that James Aitchison is fond of using). While our wireless, network, and Internet access are great, it's not going to be as good as a physical connection to the display.

That's my current option, feel free to push back in the comments or on social media.
Posted by David Hay at 4:30 PM 1 comment:

If you're trying gamification and you'd like to have a live leaderboard for a class or an event, the easiest (free) way I've found to do it with a spreadsheet in Google Drive.
Basically this involves creating a form that participants (or facilitators) submit to claim points and setting up a pivot table in the spreadsheet for adding up the points. The pivot table can be made public, embedded in a web page, and/or put up on a screen as a leaderboard.
The first step is to create a form in your Google Drive. The first question should be the participant's name/number, either as a text question (where they have to spell it the same way each time) or Choose from a list if you don't have too many participants. The other question(s) should be Multiple choice, Choose from a list, or maybe Check boxes for claiming which "challenges" they have completed. The easiest way is to have just a single multiple choice question.
What follows are a couple of examples. 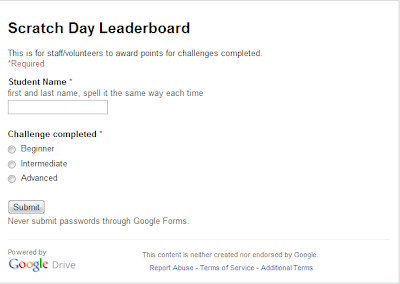 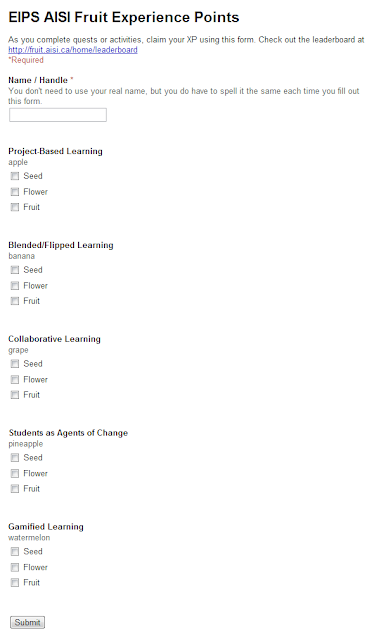 Once your form is set up, you'll need to set up the spreadsheet to add up the points as participants click submit. Submit the form once yourself to see what the output will look like, then in the columns to the right you will need to input formulas for calculating points. In the example below the formula in cell D2 is =if(C2="Beginner", 1, 0) and the formula in F2 is =if(C2="Intermediate", 5, 0) . Cell G1 is =sum(D2:F2) of course.

Once you have formulas for the all of the necessary columns in row 2 (the row containing the first submitted form data), you'll need to create a script that copies those formulas to each new row as the form is submitted. I've written about this before. In our example, we'd open the script editor and create a new script like this:

Then set the Current project's triggers to be addFormula when the spreadsheet event On form submit occurs. Your spreadsheet should now calculate points for each row, each row will be data from a form submission.

The last step is to create a Pivot table report... in your spreadsheet (under the Data menu). The range in our example is 'Form Responses'!B:G since (from the Form Responses sheet) we want participant names (column B) as well as the calculated values (columns D to G). In the Report Editor you should add the name field under Rows, and the totals under Values, as in this example.

You can now Share and/or Publish to the web... your pivot table, since it's now a leaderboard that will automatically update as participants submit the form. You'll also want to delete any unused rows in the Form Responses sheet so that you don't have an extra blank line in your leaderboard.

Let me know if that works for you, of if there's anything I should clarify.