spreadsheet formula for getting domains from email addresses

In case you're using Excel, Google Spreadsheets, or another spreadsheet program and you have a list of email addresses that you'd like to use to get a list of domains, you can use the formula:

Vernier Sensors and Arduino (or Teensy) for Data Logging

I've been thinking for a while about inexpensive data logging with Vernier educational sensors and a microcontroller development board. I played around with the TI MSP430 LaunchPad for a while, since it is only $4.30, but it's not quite as beginner-friendly as the Arduino. I eventually settled on the Arduino-compatible Teensy for its low price ($16) and small size.

Vernier does a good job of documenting sensor pinouts and calibration values in each sensor's manual, so I knew that this was a fairly easy project.

Unfortunately the sensors use a BT631A connector, which is difficult to find outside of the UK. I ordered this BT to RJ11 adaptor from DealExtreme, but unfortunately it's only 6P4C and we need 6P6C (6 conductors). All six pins are used by the sensor, but we really only need pins 2, 5, and 6. I'll try ordering something from UXCell or Vernier, but for now I've just used some breadboarding wires stuck into the back of the connector. 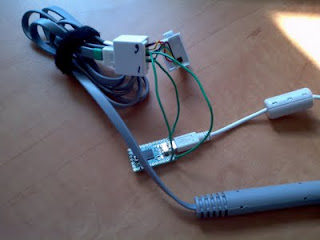 The required connections from the sensor are
pin 2 to ground (GND)
pin 5 to +5V (VCC)
pin 6 to an analog in (A0)
(I haven't gotten around to trying out the auto-ID function, but that's not an extremely useful function for my purposes anyway.)

Since this my first real microcontroller project, I followed the tutorials on the Teensy site regarding connecting something to the analog input. I modified some example code by Tom Igoe and came up with:

Watch the output in a serial monitor program on your computer, and paste it into a spreadsheet program for graphing. Eventually I'll build a GUI for adjusting sample rates and number of sensors and maybe some live graphing, add some calibration, and put it in a better enclosure.
Posted by David Hay at 11:53 AM 5 comments: