Inspired by a blog post about making tool control mats with a CNC router, I made a "tool" control mat for a video game club's shelf. 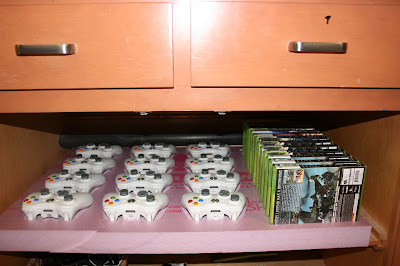 Using Inkscape I imported a vector drawing of the 360 gamepad by grumbel on the Open Clip Art Library as the basis for the outline of the controller, resized it to the dimensions on the Wikipedia page, and made 12 copies of it (since that's how many controllers the club owns). 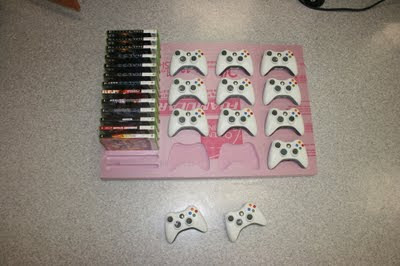 The slots for the games were just rectangles using the dimensions from another Wikipedia article. I discovered that I had to convert these objects to paths (under the Path menu in Inkscape) before I saved the file as a DXF file (or PDF file, depending on which CAM program you're using). 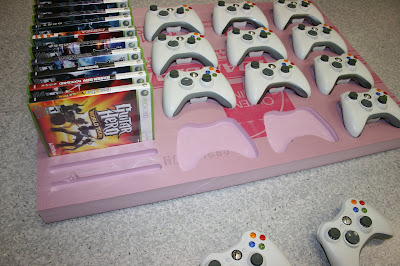 I converted the drawing to G-code for a 1/2 inch end mill as a roughing pass, thinking that I'd then do a finishing pass with a smaller bit, but decided that it was good enough after the first pass. I milled it from two inch thick extruded polystyrene foam (Styrofoam), then cut it down to size on a radial arm saw (which explains the mistake you see on the side in this last photo). 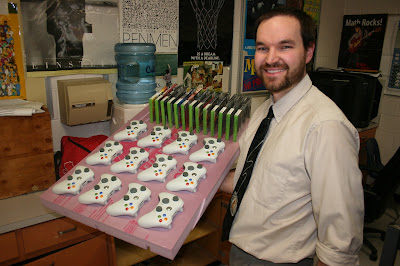 Not bad for my first successful CNC project, if I do say so myself.

Edit: I also published this an an Instructable.
Posted by David Hay at 9:43 PM No comments:

Labels: how to, ideas

After experimenting with many different programs for CAD (3D design) and CAM (turning that design into code for a CNC router), I've come up with a good workflow using easy and free tools:


The process that works for me is
Hopefully this will be simple enough for students to start designing and cutting things.
Posted by David Hay at 8:35 PM No comments:

Labels: how to, software

notes from the tablet symposium

I recently attended a Tablet Symposium hosted by the ATLE (Alberta Technology Leaders in Education) where a number of vendors presented their current or upcoming tablets. While there we added information to a specifications spreadsheet, and what follows are my personal impressions from that symposium, in the order that the presentations occurred.

HP
WebOS is very cool, and I think they will be a major player. Good integration with their smart phones, similar to RIM. I'll be interested when these products finally come out. I really like their inductive charging.

Toshiba
They seemed to say, "We'll also be making tablets in the future, both Android and Windows."

Asus
Eee Pad Transformer is awesome. $400, decent specs, and a keyboard dock that turns it into a laptop and doubles the battery life. My favorite of the event. The Slider and MeMO look decent too, but I'm not interested in their Windows 7 tablet, even though it's available now.

RIM
Integrates with your BlackBerry, works without it too. Committed to the seven inch size for thumb typing and portability, which I like.


Dell
I'm not impressed with the Dell Streak 5 and 7. Android 2.2 and relatively low resolution makes them seem like big phones. The convertible Inspiron Duo netbook/tablet is not bad if you're wanting a Windows netbook anyway.
Samsung
The current Galaxy Tab is overpriced and not competitive any more, there's not much information available about the attractive upcoming Android 3.0 tablets.

Acer
Android 3.0, Windows 7, decent specs, not much information on price or availability.

Motorola
The Xoom is nice, good specs, Android 3.0, cheaper than the equivalent iPad, and available now.

So if I had to rank my favorites, off the top of my head based on my impressions, I'd say:

A number of the things we saw were pre-production, so don't hold me to this list, but I just wanted to write some quick off-the-cuff remarks.

---
Edit: One of my colleagues wanted to add that although his overall impression was positive, it would have been beneficial for us to have more play time with the devices, rather than just passing them around the room. He also wanted to note that he too was impressed with the Motorola Xoom and the Asus Eee Pad.
Posted by David Hay at 10:07 AM 2 comments:

For example, if you are running Xibo for digital signage and don't want anyone to be able to close the program (or do anything on the computer).

Using AutoIT, the following script (which can be compiled to an .exe file) will block user input until a Notepad window is detected, which is just my way of saying BlockInput forever.

Unfortunately this does not block the "three finger salute" (Alt Ctrl Delete). Using AutoHotkey, which I am somewhat more familiar with, you can disable the task manager. Again this can be compiled into an executable.

; This script disables the task manager, and re-enables it with the key combination Windows + 1

And to call this compiled script from the AutoIt script that we first talked about:


Edit:
It seems that AutoIT has RegWrite and RegDelete functions, of course. I rewrite the script(s) accordingly.
Posted by David Hay at 5:09 AM No comments:

transferring videos to my 5th generation iPod (with video) on Ubuntu

This is more for my own notes, so that I remember if I have to do this again.
Posted by David Hay at 4:16 PM No comments: